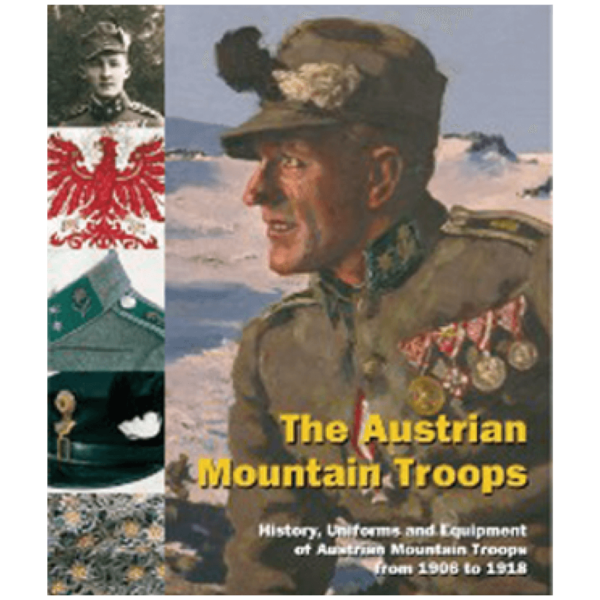 This book gives a vivid impression of the soldiers who defended Austria-Hungary’s borders. Assets of the Tiroler Kaiserschützenmuseum in Innsbruck were photographed, supplemented by rare artifacts from private collections.

History, Uniforms and Equipment of Austrian Mountain Troops from 1906 to 1918. This illustrated book of 320 pages shows the uniforms and equipment of Austrian mountain troops in the First World War. More than 1000 color illustrations and contemporary black and white photographs give a vivid impression of the soldiers who defended Austria-Hungary’s borders in the high Alps. The Tyrolean Kaiserschützen and mountain regiments were among the bravest in the k.k army and made a decisive contribution towards the first high mountain war in world history. Nevertheless, it was only shortly before the outbreak of the First World War that the Danube Monarchy could bring herself to form specially trained mountain units. It was these troops – often outnumbered – who defended the borders of their homeland in the high Alps under sometimes unimaginable conditions and sacrifices. In this lavishly illustrated book, you can discover with what uniforms and weapons the Austrian troops went up the mountains against the enemy, what dangers and anomalies the k.k. mountain troops had to face in the mountain war and, above all, what tactics developed in mountain warfare. Mine warfare in the high mountains, fighting on glaciers and the development of cable car systems round off the book. For the first time the assets of the Tiroler Kaiserschützenmuseum in Innsbruck, which are not accessible to the public, were photographed for this book, supplemented by rare artifacts from private collections.