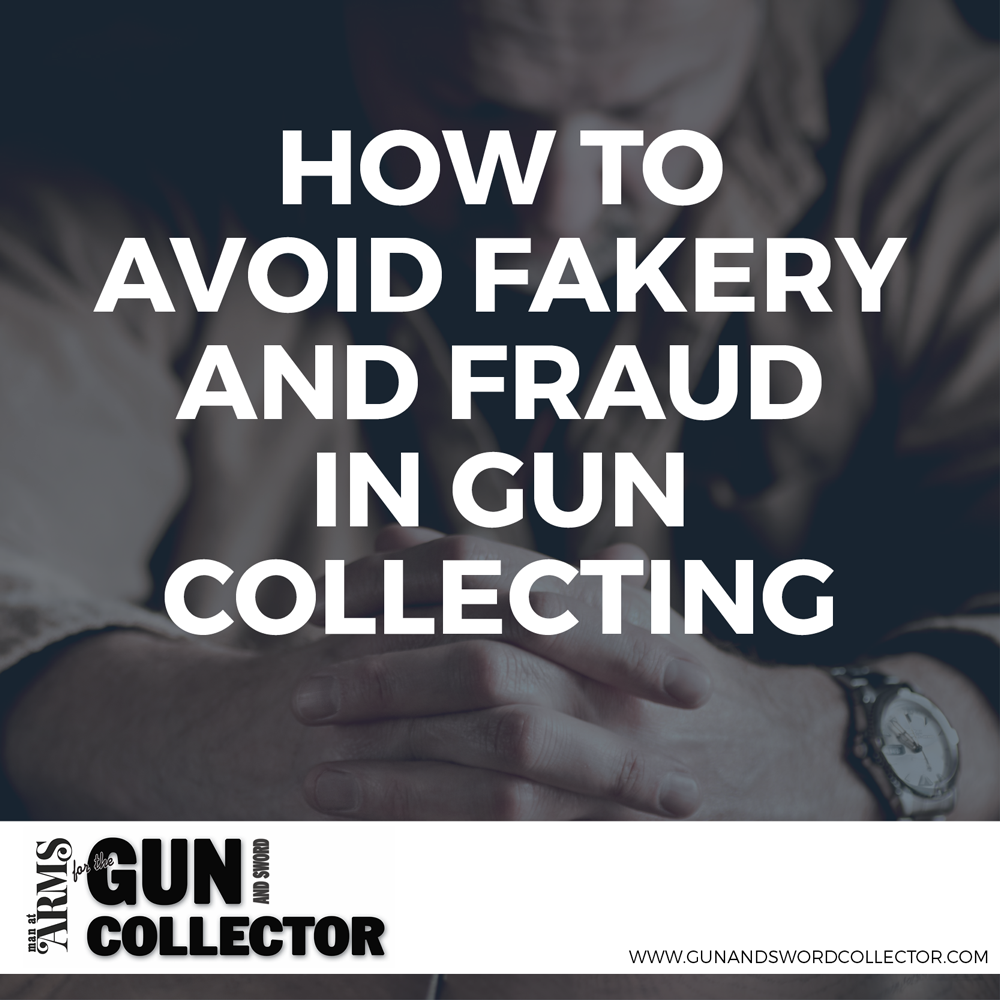 Stuart Mowbray, editor-in-chief of Man at Arms for the Gun and Sword Collector, recently took up the issue of fakery and fraud in gun collecting in his editorial column in the magazine, and it is an important topic to consider for both novices and experts alike.

The two sections reproduced from the article below give you suggestions on how to stop being a victim of fakes and fraud in gun collecting, and how to begin making smart purchases. Copies of this issue which includes the original editorial, can purchased as a back issue.

How to Avoid Fakery and Fraud in Gun Collecting

From Man at Arms, February/March 1998

Fake arms and armor have been around for a long time and can be very difficult to detect. If it is hard to identify an all-out fake, then it is even harder to recognize when a real gun or sword has been “enhanced” by an expert. We have all see wonderful, although plain, pieces that have been “dolled up” with fake inscriptions, fancy grips, silver mounts, etc. And as these enhancements age, they become more and more difficult to recognize.

The entire situation is made even trickier because we, as collectors, often disagree about what is allowable.

These are all questions about fraud in gun collecting that we ask ourselves every day. They are good questions to think about, even if we aren’t sure of the answers.

I guess the bottom line on all of this is that it is impossible for the average collector to know the whole story behind every gun that he or she buys. This is a simple reality in every field of antiques collecting from furniture to stamps. And, most of the time, it doesn’t really matter that much, because we are talking about minor details that don’t add up to a lot in terms of price.

The thing we need to guard against is big-time fraud in gun collecting. Here are some suggestions we can use to protect ourselves.

In last issue’s editorial, I discussed some ways that collectors can protect themselves from fakery and fraud in gun collecting.

This topic apparently struck a cord, because I was flooded with phone calls and letters from readers. These folks were unanimous in their belief that fraud in gun collecting, including fakes and restorations, is becoming a crippling problem in our hobby, and that the only solution is open discussion and heavy publicity of true fraud when it is discovered. These readers also had some other ideas for us to think about. Some of their suggestions are worth serious consideration.

Suggestions From Our Readers

New collectors (and even experienced ones for that matter) should do a lot of reading and studying before they make large purchases. Too many people make $1,000 mistakes because they didn’t buy the $35 book.

Especially if you aren’t a seasoned collector, it is often worth seeking out a dealer with a good reputation who specializes in what you want. While you will almost never get a “great deal” from a specialist dealer (because they know the true value of their stock), you aren’t likely to end up with a “lemon” either. Top dealers can be thought of as filters. Their good taste and sharp eye for detail weeds out the junk. This can be a service worth paying for.

Don’t be shy about asking your friends for advice when you aren’t sure about the originality of a gun or sword. Two heads are better than one.

A number of readers suggested that I included some comments about buying at auction. An increasing percentage of purchases these days are being made at auctions, rather than gun shows. Because of their unique nature, they involve some special considerations.

Protecting Against Fraud at Auctions

From the “Ricochet” column of Man at Arms (July/August 1998)

Just a few thoughts regarding your two recent editorials. I am very pleased that you are calling attention to the fact that we are being inundated with fraud in gun collecting. As you probably know, I have been authenticating the U.S. Cavalry and Artillery revolvers for the past ten years or so. Although I am semi-retired, this activity has, in recent months, escalated to the point that it’s a nearly full-time occupation!

It seems to me that, as prices of these U.S. Cavalry revolvers continues to rise, the fakers are working overtime to produce these revolvers. The big thing today is to take a mismatched Artillery revolver, restamp the serial numbers so that they will match the frame number, then either “stretch” the existing barrel or fit the revolver with a newly manufactured barrel. The grips can have newly applied inspector’s cartouches, and the barrel’s address can be the desirable “script style.” Some of these counterfeits would be very difficult to spot at a gun show.

Anyway, what I’m getting at is that this field of fakery now prevails in our industry. Although I am authenticating the U.S. Single Actions, we need experts in other prime collecting fields like Lugers, Winchesters, Springfield Carbines, Colt M1911 Autos and other fields of collecting where faking is rampant, to take on this challenging work. I would like to see a group of our fellow collectors who are qualified in their particular field of collecting to establish a coalition of Antique Firearms Authenticators. The time is now, before all the honest collector firearms are forever ruined!

From the “Ricochet” column of Man at Arms (July/August 1998)

I read with great interest your last two editorials, pertaining to the subject of fraud in gun collecting

Stuart, I have been in the business of repairing/restoring these old treasures most of my adult life. I assure you that every time we see another flagrant attempt at forgery I think, how could anyone top that fake job (we call them “hump-ups”)? But then another faked firearm comes in that’s even better (worse?) than the former one. It never ceases to amaze me when I see the lengths that some folks have gone to in order to create a forgery. Most of this work is mediocre, so it’s easy for me to spot.

A small percentage of it, though, is simply gorgeous work that can be darned difficult, even for an expert, to identify. Honestly, it is at times impossible to tell. In those cases, when a real master has done his work, the only proof of its legitimacy might come from factory historical documentation. When that is not available…well, is it “real” or not? The final proof could come with an x-ray examination, although I suspect very few gun collectors have one of those machines sitting in their den.

The point is that even mediocre work can easily slip by a novice collector, and hey, even a few of the more experienced folks won’t pick up on the fakery…

We have always tried to do what would be termed “authentic” work on a given antique firearm. In other words, work that would be in keeping with what the maker of that gun would have done during the time period of its manufacture. As such, this work is not always easy to spot. For posterity, we have always signed our work, especially in case of restoration work or truly extensive repairs. I’ve gotten a few protests about the signature on the metal under the grips, or on the tang under the stock, but not many. We always figure it was best to be fair to the gun’s future owner, who, left to his own imagination, may well be assuming that the piece is totally original. I believe that most people agree with this practice.

Your editorials in this light are exactly the sort of information the collector needs, most especially the novice. There truly aren’t many people in this business who would stoop to this level of fraud in gun collecting. However, it never takes more than a couple of rotten apples to make the whole barrel look sour. You are entirely correct in advising collectors to buy and read the books pertaining to their interests — these are indeed the cheapest, most basic assurances against being fooled.

We have advised this also, as well as visiting museum and viewing collections with pristine examples of the type you have an interest in. No matter what the books tell you about these guns, there is no real substitute for the visual recognition by familiarity. If collectors will only take their subject seriously enough to use both methods in unison, they will lessen their chances of being tricked to a large degree.

Man at Arms is a wonderful publication, a treasure trove of pertinent information, and, by gosh, enjoyable to read. Keep up the great work. You folks are making a valuable contribution to collectors everywhere!

From the “Ricochet” column of Man at Arms (September/October 1998)

In your recent editorials, you have clearly defined the problems which we as collectors are facing. There is rampant counterfeiting of firearms which are being offered for sale at the arms shows and firearms auctions. This fakery is now found in all fields of firearms and blade collecting, wherever the dollar value permits. Many auction houses have started to include an “as is” provision in their catalogs. And some of the dealers at the shows have also unofficially adapted a “caveat emptor” theme to their operation.

For several years, we have approached this problem by insisting that the buyer receive a money-back, written receipt with every purchase. Although this method has been time and time again advocated, unfortunately, it has not come into full acceptance. We still hear of instances where a dealer will not refund the buyer’s money. Only by the threat of legal action can the buyer possibly recover what is due him when a fraudulent purchase has been made.

Now…we believe it is time that we as collectors and dealers come to grips with this problem. Only by working together can we curb this trend of fraud in gun collecting that is devastating our hobby.

I believe that this serious trend can be reversed. It will entail a “where the rubber meets the road” effort on the part of all three involved parties. This new approach will work in the end, if we all pull together and make it work. This proposed program would involve the free distribution of “Certificates of Disclosure” at every show.

This “Certificate of Disclosure” would be given by the dealer to, and requested by, the purchaser of every firearm. It would include the name, address, phone number of the seller; name and serial number (if any) of the firearm; and most importantly, a disclosure of what the dealer believes deviates from originality in the firearm being represented. Has it been re-blued? Re-casecolored? Stock replaced? Barrel address re-applied? Recently engraved? Or any one of hundreds of “enhancements” that may have been accomplished. If the buyer will then purchase the item, knowing these “enhancements” in advance, then he has purchased the item with full knowledge and understanding of these recent embellishments. This “disclosure document” then becomes in reality a “truth in sale” agreement between the buyer and seller. A guarantee of full refund should also be stated in this document if other alterations from those disclosed are subsequently found.

These proposed pre-printed “Disclosure Certificates” should be freely made available at the entrance of the show, and available to all dealers at their arrival. Sure, we’ll lose some dealers, but do we really need them? Think it over…

Does all of this mean that you should pass on an item you really want because the catalog and conditions of sale aren’t perfect? Of course not! But you should learn these things before you bid, or you may end up disappointed.

How to Get Started as an Antique Weapons Collector

Here at the offices of Man at Arms for the Gun and Sword Collector, we…