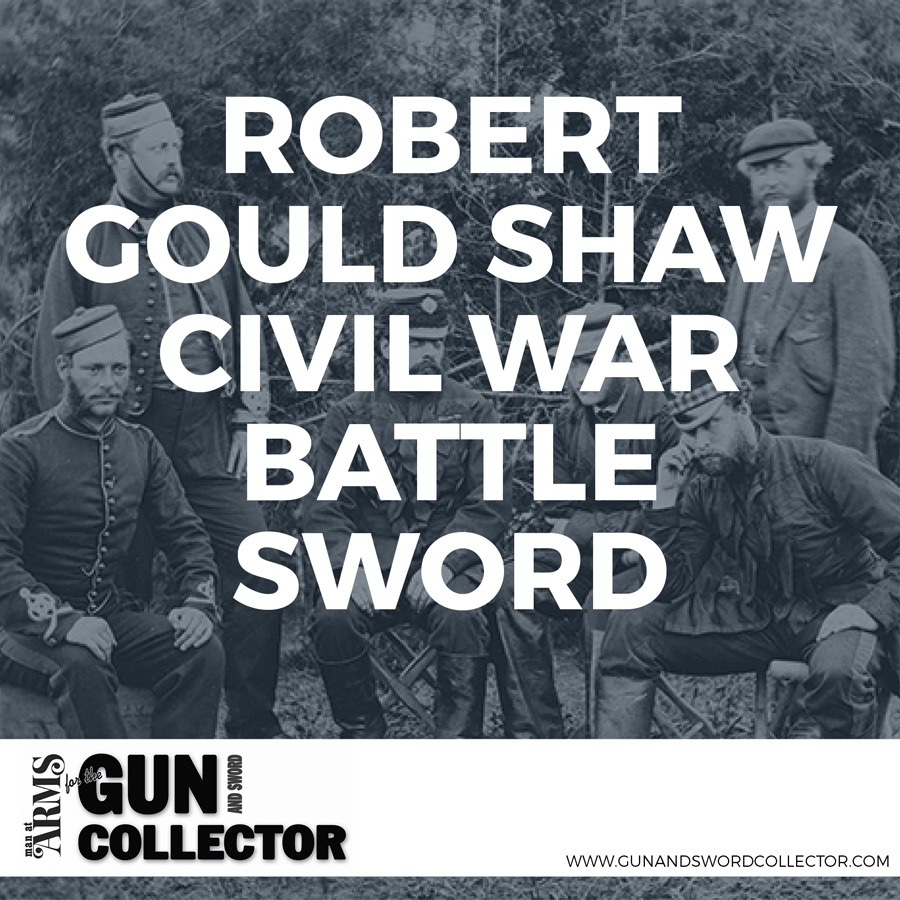 A few months ago, we were contacted by the Massachusetts Historical Society and asked to take photographs of a sword that had just been donated…but we were sworn to secrecy about what it was! Well, now we are allowed to spill the beans. It is the previously unknown battle sword of Civil War hero Robert Gould Shaw, who famously died at Fort Wagner while leading the 54th Massachusetts Regiment (the first African-American regiment raised in the North during the Civil War).

Many of you will remember Robert Gould Shaw as the character played by actor Matthew Broderick in the popular movie Glory. Or perhaps from the massive bronze relief sculpture memorializing him on Beacon Street in Boston by famous artist Augustus Saint-Gaudens.

When we initially posted this as “breaking news” on our Facebook page, we received a large number of requests for the provenance. And boy is it good!

Shortly after his commission to colonel on April 17, 1863, Robert Gould Shaw’s uncle George R. Russell ordered him an officer’s sword as a gift from British sword manufacturer Henry Wilkinson. According to Wilkinson factory records, the blade was proofed in London on May 11, 1863, etched with the initials “R.G.S.”, mounted, and sold two days later.

In a letter, Shaw’s father noted “The sword was a present to my son from his uncle…who purchased it in England and caused the etchings to be made there.”

On July 1, 1863, Shaw wrote in a letter that “A box of Uncle George’s containing a beautiful English sword came...”

Robert Gould Shaw already owned a sword, but it wasn’t appropriate for the rank of Colonel, so this new English sword is the one he carried into combat.

After Shaw was shot to death while storming Fort Wagner with this sword in his hand, it was stripped from his body along with his other possessions and all his clothing, except for his underwear. He was buried in the rifle pits below the parapet with his dead men placed on top of him.

Recovery of the Sword

Since Shaw came from a prominent family and had died in such a noteworthy way, there was a strong desire amongst Union officers to recover the items that had been taken from him. Just after the conclusion of the war, General Charles Jackson Paine wrote to Shaw’s father from North Carolina saying that he “heard the other day of the sword of the late Robt. G. Shaw killed at Fort Wagner, in the possession of a rebel officer… I sent out and got it; the scabbard was not with it. I am going to send it on as soon as I have an opportunity.”

There is some speculation as to who this Confederate officer was, since he was not present at the time the sword was recovered from his home.

The sword was returned to the Shaw family in 1865. Shaw’s father noted that “so far as such words may be applied to an inanimate thing it is the weapon which has done most for our colored people in this war, and it is…a source of great satisfaction that it was recovered...”

On January 28, 1876, Lydia M. Child wrote in a letter that she “spent last winter with the parents of Colonel Shaw.” In their hall they had on display the flag of the 54th Regiment and the sword of Robert Gould Shaw. She noted, “It is very handsome, being richly damascened with the United States coat-of-arms, and the letters R.G.S. beneath.”

The sword passed down through the Shaw family until March of 2017. At that time, it was found in the attic of a home they were emptying out for sale. It has since been donated to the Massachusetts Historical Society, where it is now on prominent display.