How many memories do you have from your childhood

Not ones that can be brought back to mind by photos, but solid chunks of recollection that live with you day in and day out for the rest of your life? I have rich memories that come to me randomly, but if you asked me for a story from my earliest years, the list I could draw from would be pretty darned short.

This is one of them.

My dad Andy, the founder of this magazine, was always up to something. The adventures he had in and around “Hearthside,” the Federal-era mansion where I grew up, live inside me like legends, with my father and his band of oddball friends inhabiting each scene like heroes capable of anything. And in the Fall of 1971, they moved a cannon.

Yes, it’s another cannon story. So whenever you hear about me blowing myself up with a 16th-century mortar, just remember…I ended up weird for a reason!

The artillery in question was a French four pounder cast around 1728. It must have fallen through the ice during the American Revolution, presumably while being transported to or from the Siege of Boston. A WPA dredging crew discovered it in a Warwick, Rhode Island, river during the Great Depression, and it ended up being displayed on a concrete stand at the local Pontiac dealership.

When the dealer went out of business, my dad bought the tube at auction for $400 and had it delivered to his house, where it sat on the ground next to the driveway for a couple of years until a friend of ours crashed into it with his enormous 1956 Imperial LeBaron, which had been custom-made for Walter Chrysler Jr., the son of automobile manufacturer Walter P. Chrysler.

Dad figured that it was time to put it on a carriage (the cannon, not the car), which was promptly built by a pal of his named George Lucier in a swap for a nice Smith & Wesson revolver. But how to get the cannon onto the carriage? It weighed about 1,500 pounds!

As it turns out, the corral for my sister’s horse, Sergeant, was about to be repaired, and there was a pile of fence posts sitting on the ground. A bunch of my brother and sister’s friends were hanging around in the kitchen, so dad rounded them up and everyone headed out to the front yard where they lined the fence posts up, and used them as rollers to bring the cannon across the yard and into position next to the new fortress-style carriage.

In the pictures shown here, I’m the little kid “supervising.” 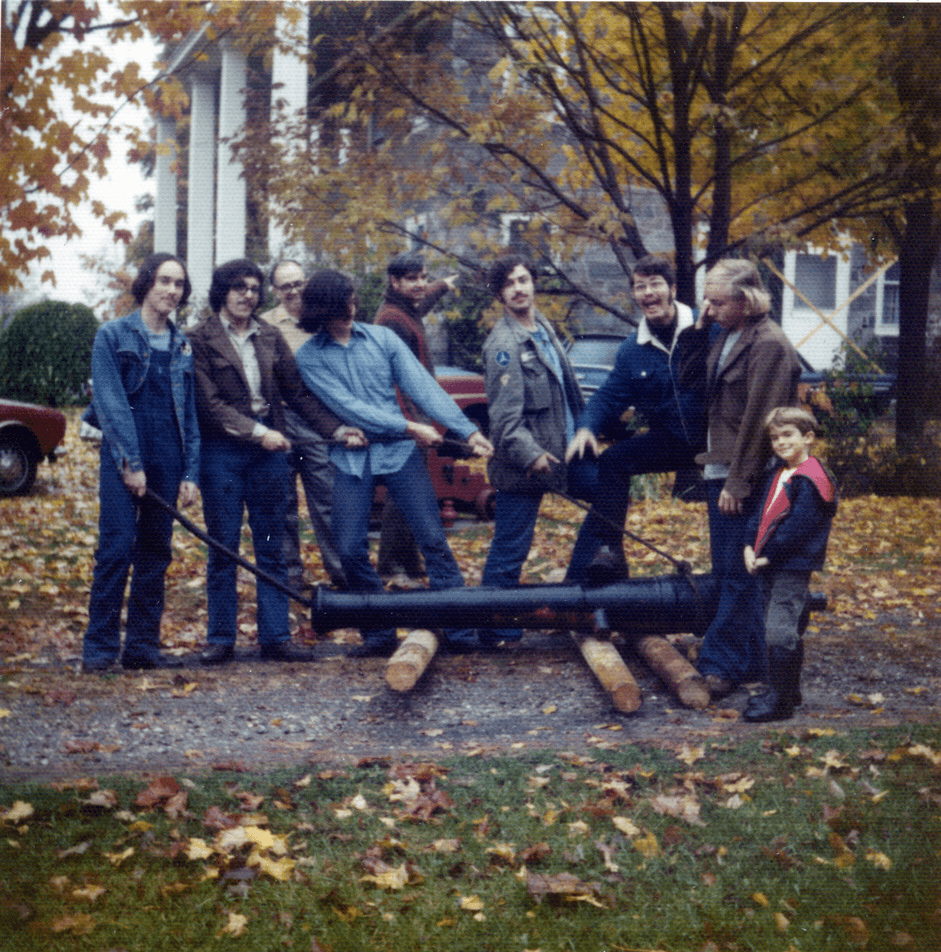 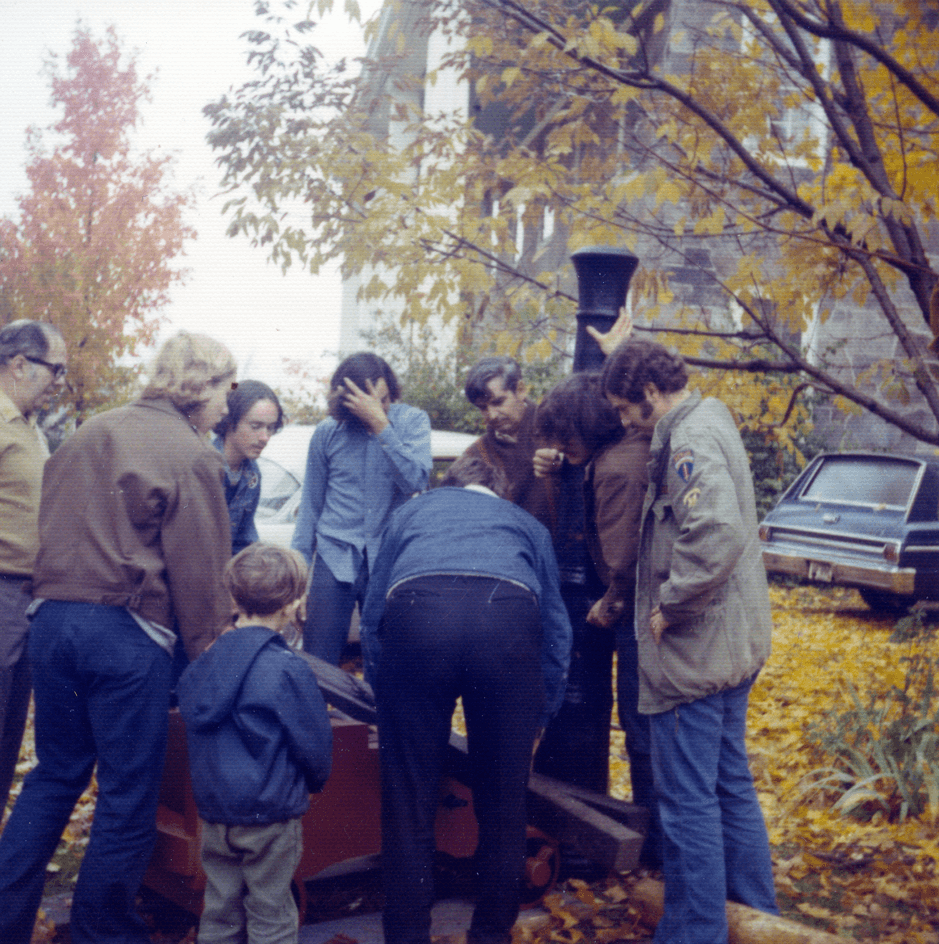 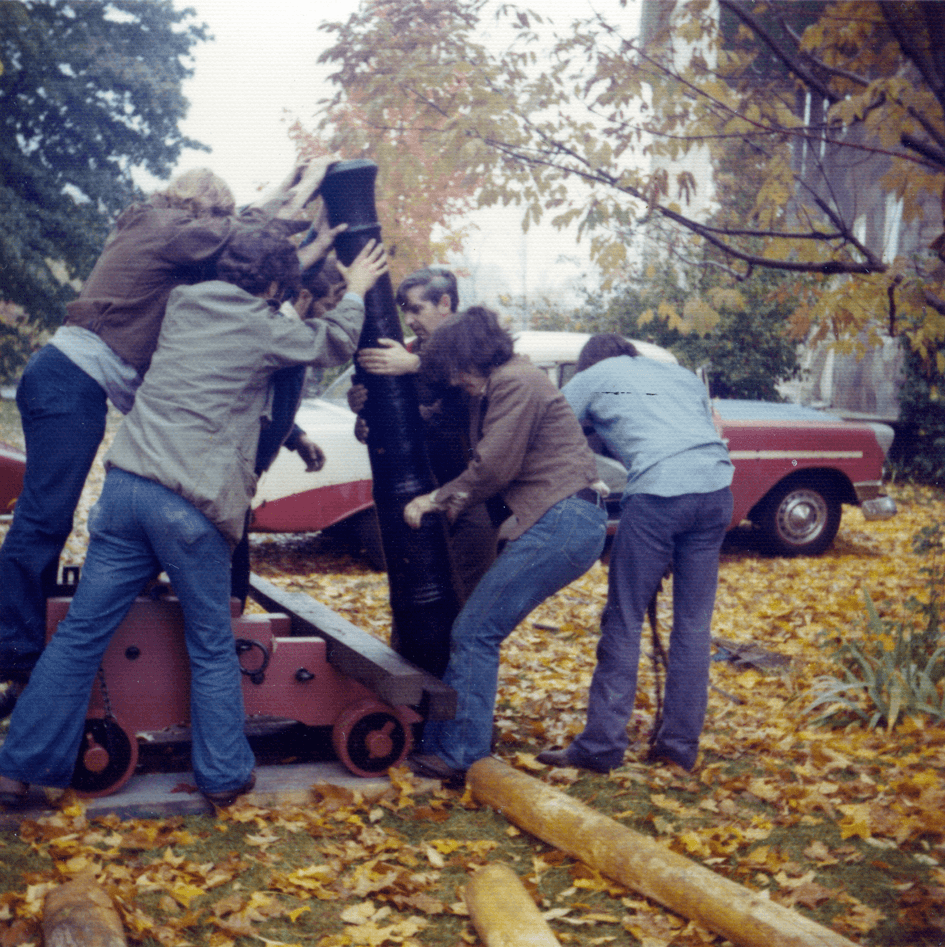 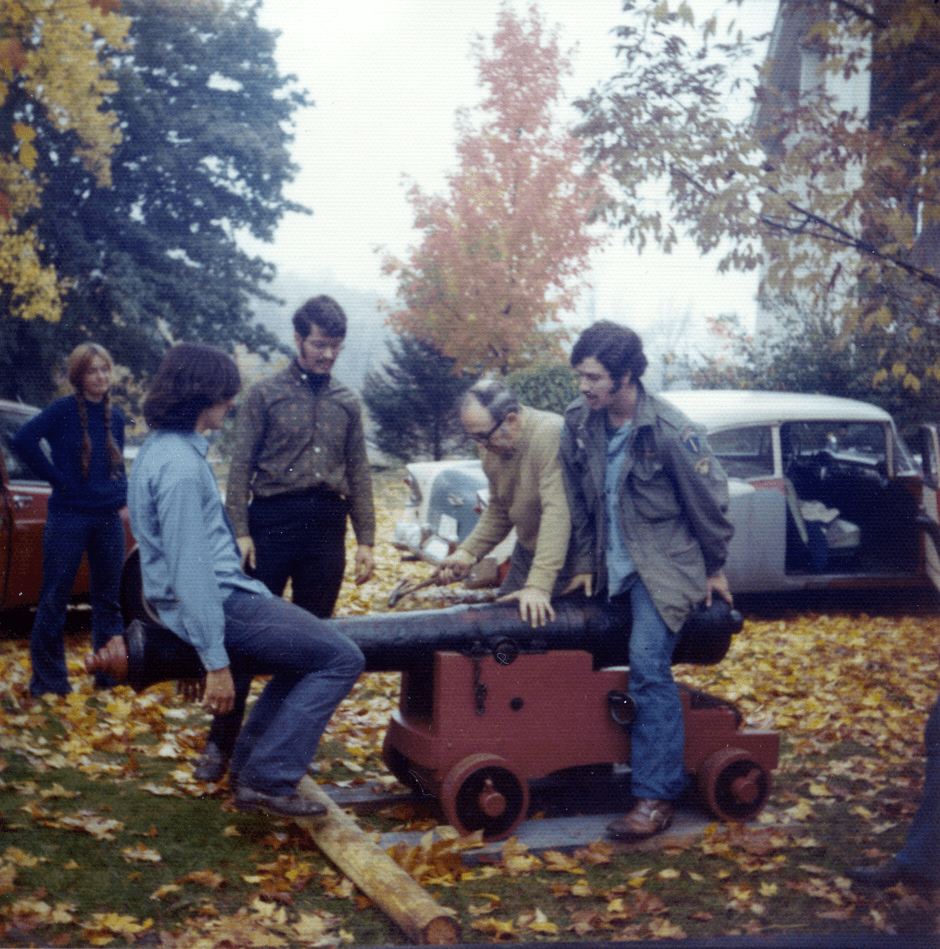 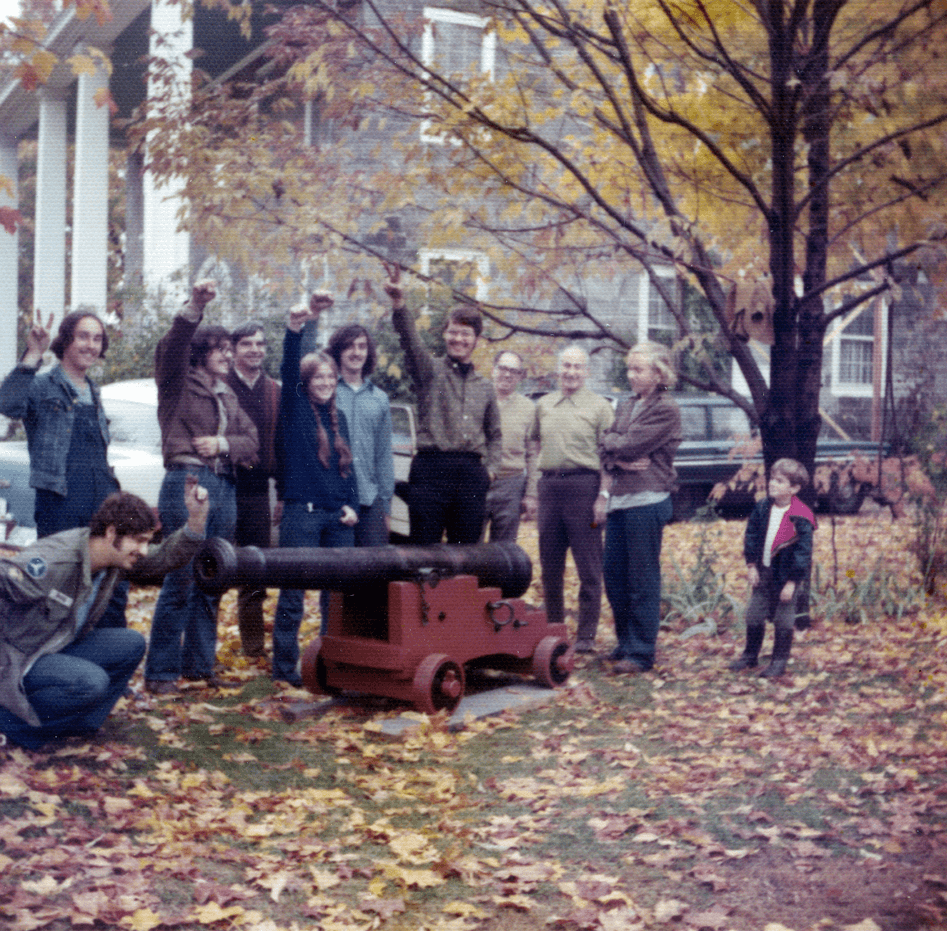 It was quite a sight as they manhandled the tube over the grass and tipped it up with its muzzle pointing towards the sky. It was so heavy that the cascabel sank into the ground and left an impression that I was still bumping into with my lawn mower years later. That’s current Man at Arms technical editor Joe Puleo (then 20 years old) holding it upright in his World War II “Ike” jacket!

Then came the tricky part — lowering the tube into position on the carriage without dropping it and smashing anything or anyone. Timbers were placed across the rear of the carriage, which were then used to jockey the enormous iron beast into place. It took nearly everyone who was there to get this done.

When the trunions fell into their notches, a great collective sigh of relief went out. The whole project had taken a couple of hours, but  it was a success, and everyone started horsing around, riding the cannon like a see saw and pretending to shoot each other with it.

My brother Drew, for some reason, thought that it might get stolen (but to this day I wonder by who…and how?). So he chained it to a nearby tree that you can see at the right in the photo below. Fifteen years later, the tree died and we found that chain embedded in the bark, where it had girdled and killed it.

By the way, the revolver dad traded for the carriage was one of several Model No. 1, Third Issues that he bought brand new in their original boxes, right off the shelf in an old hardware store — where they were still in stock from the 1870s and priced at five dollars each! He religiously stopped at every hardware store and asked if they had old guns. Sometimes he got really, really lucky!

2 thoughts on “In Next Issue: Childhood Cannon Memories”